Courtesy of wikipedia
A vacuum’s suction is caused by a difference in air pressure. An electric fan reduces the pressure inside the machine. Atmospheric pressure then pushes the air through the carpet and into the nozzle, and so the dust is literally pushed into the bag. 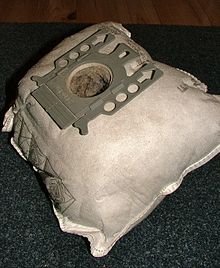 A filled up dustbag. The frame around the opening fastens it to the interior side of the cleaner’s hose inlet.

Vacuums by their nature cause dust to become airborne, by exhausting air that is not completely filtered. This can cause health problems since the operator ends up inhaling respirable dust, which is also redeposited into the area being cleaned. There are several methods manufacturers use to control this problem, some of which may be combined together in a single appliance. Typically a filter is positioned so that the incoming air passes through it before it reaches the motor, and then the filtered air passes through the motor for cooling purposes. Some other designs use a completely separate air intake for cooling.

It is nearly impossible for a practical air filter to completely remove all ultrafine particles from a dirt-laden airstream. An ultra-efficient air filter will immediately clog up and become ineffective during everyday use, and practical filters are a compromise between filtering effectiveness and restriction of airflow. One way to sidestep this problem is to exhaust partially filtered air to the outdoors, which is a design feature of some central vacuum systems. Specially engineered portable vacuums may also utilize this design, but are more awkward to set up and use, requiring temporary installation of a separate exhaust hose to an exterior window.